Lesson 1 of 0
In Progress

ABM: A look through the eyes of an AWACS ABM

The roar of the jet engines fades into the sky, unheard by any on the battlefield.  Fighters and bombers, laden with their deadly wares, loiter in coordinated holding positions, poised to strike.  Tankers make steady, lumbering arcs through the sky, flying along their racetrack pattern, periodically supplying the smaller, shorter range fighters with fuel.  Back at the JOC (Joint Operations Center), the cool, conditioned air hums with an ever-present tension as the Army, Navy, Air Force Marine representatives coordinate the movements, actions, and logistics for their respective teams and assets.  The GFC (Ground Force Commander) has made clear his intent and has distributed tasks and delegated authorities to see it carried out.  This intent is passed to yet another high-value airborne asset, also loitering in the skies above the battlefield. 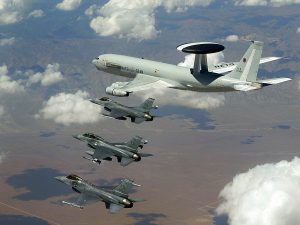 This particular aircraft, a converted and heavily modified airliner, bulges with unusual shapes, bristles with antennas, and buzzes with the activity of its crew.  Each member has a critical role, operating equipment, coordinating with other assets, and conducting flight operations.  As the fighters, bombers, and tankers conduct their missions, each checks in with their primary controlling asset.  Their radio calls are sent through the headset to the ears of a particular set of highly trained and skilled operators, known as ABMs (Air Battle Managers). 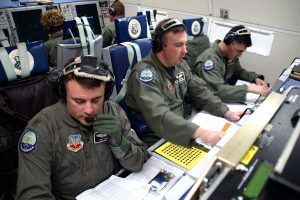 As an Air Battle Manager, you will have a few different mission systems on which you can serve.  Each will require its own follow-on training after Undergraduate ABM Trainng.  The primary systems from which ABMs operate are the E-8 JSTARS, the E-3 AWACS, and the CRC.  To give you an idea of what each is and what its mission focus is, we’ll take a quick look into each:

While it may look like an airliner with a big canoe bolted underneath, the E-8 is a highly capable aircraft for providing SA enhancing C2 (Command and Control) and sophisticated surveillance information to warfighters and decision makers.  With the ability to analyze large swaths of the battlefield in order to locate, identify, and classify ground targets, the E-8 provides critical information on just exactly what the bad guys are up to.  If it meets the commander’s intent to stop those bad guys from doing what they’re doing, the E-8 also provides the necessary coordination to guide strike assets like the F-15E Strike Eagles and B-1B Lancers to persuade them to stop via precision delivered, high explosive ordnance.

In short, the JSTARS controls the air to ground battle.

Its that one with the giant frisbee mounted on top of the converted airliner, the one that looks like it shouldn’t fly.  You can’t miss it.  It’s the one that Chemtrails conspiracy theorists think is up to no good and that movies always snap to whenever fighters get scrambled or the president gets alerted of a rogue nation state spinning up to launch the first strike.

While the slowly spinning radar dome (radome) sitting atop ungainly struts may be the most distinctive feature of the AWACS, the aircraft is packed to the gills with sophisticated equipment and systems, and highly trained cremembers.  Among these are the ABMs who operate the systems and manage the airspace.  The radar, data links, radios, and myriad other SA and communications tools supply the AMBs with locations of friendly aircraft and the radar signature of approaching “BOGIES,” or potentially hostile enemy aircraft.  If the commander’s intent is such, and the BOGIES are confirmed hostile, the systems and crew abord the AWACS are utilized to direct friendly aircraft either away from a threat and to safety, or right towards the threat to blast it the hell out of the sky.

In short, the AWACS controls the air battle.

The CRC (Control and Reporting Center)

While there are plenty of ungainly protruding shapes on the CRC, there is a noticeable absence of sleek wings and roaring jet engines.  A mobile, ground-based system, the CRC is basically a box with a sophisticated radar, data links, and communications system.  Inside, the crew and ABMs serve many of the same functions as those of the AWACS.  From this box, ABMs control aircraft entries into ROZs (Restricted Operations Zones) for strike operations, timing release of aircraft to go sip some gas from a tanker, or providing range and bearing to a BOGIE in need of some thermodynamic love from an AMRAAM.  As its operations are conducted from the ground, a CRC assignment lacks the allure of flight, but given its proximity to the battlefield is often a very tactical and operations heavy role.

In short, the CRC controls the air battle…but from the ground.

With experience and mission hours racked up, ABMs have the opportunity to become instructors.  The complex mission set and evolving battle space requires instructors who are proficient technically, proven as capable, and who educate the next generations of this high-priority and critically manned field.  Instructors who work at the schoolhouse can expect several years at Tyndall AFB, educating and training the undergraduate level students.

As we’ve seen, the ABM role is unique, specialized, and highly technical.  It should come as no surprise then that there are few direct applications in the private sector.  Probably the next closest role would be an air traffic controller – but while they are dealing with thousands of lives every day, that role also lacks the complete complexity of handling aircraft dropping bombs, slinging missiles, getting close enough to other airplanes to literally touch (via refueling booms), and responding to things with explosive tips and deadly intent.