Just as the United States President conducts a State of the Union address, I thought I would take a few minutes to discuss the State of the Pipeline as it pertains to Air Force Undergraduate Pilot Training (UPT).  Since the Covid-19 Pandemic began, the aviation industry has been fighting to find the right balance between workforce reductions and predicting future manning, with an eye towards optimism.  The Air Force has been no different in this regard, except that the Air Force was already facing a manning issue in the form of a pilot shortage, and the current pandemic has strangled the pilot training pipeline to a snail’s pace.

The Air Force is aware of the shortfall between the number of UPT students graduating each year and the number of pilot positions required to sustain a viable fighting force, and it is looking to implement several new and innovative programs to help alleviate this problem.  Prior to the summer of 2020, the Air Force Reserve Component was using several unique tools to help get more qualified pilots into available UPT slots, in order to maximize the pilot training pipeline.  The use of a dual-track “sponsored” and “unsponsored” program allowed qualified applicants to enter the pipeline quickly. Those trainees who were unsponsored would attend UPT without having yet been hired by a specific unit.

As Covid-19 hit the U.S. hard in the spring of 2020, the UPT bases were forced to pause training several times and like all of us, change procedures to ensure the health and safety of the students, instructors, and support staff before resuming operations.  The result was a complete backflow in the pipeline leading to delayed graduations, current students left in limbo, and further delay for those candidates awaiting UPT start dates.  As you can imagine, the effects of the back-up in the pipeline have reached all the way back to the squadron level and the hiring process.  In fact, the Air Force Reserve has decreased the number of pilot slots available each of the last three years, and FY21 is no exception.

As the UPT pipeline begins to creep along once again, it will take new and innovative programs to help staff the Air Force for the next few decades.  The Air Force is currently implementing UPT 2.5 and the Civil Path to Wings program, among others, in the hope of decreasing the pilot shortage gap and bolstering the force for future generations.

Retention has always been an issue within the Air Force when it comes to pilots.  When the economy is good and commercial airlines are hiring, it is difficult to keep pilots from leaving the Air Force in order to join the ranks of commercial pilots in pursuit of a better quality of life.  However, when the economy is in a downturn, there is a worldwide pandemic, and the airlines are furloughing pilots, retention is no longer an issue.  This is the current condition of the Air Force, as both active duty and Guard/Reserve pilots have flocked back to their squadrons looking for full-time employment to get through the slump.

My belief is that not only will the effects of the pandemic on the aviation industry be short-lived, but the people returning and/or electing to stay in the military are the rank of Major and above, and as such will either retire in the next few years or return to the airlines once the hiring boom resumes.  Although the Air Force currently sees the manning document as full, a closer look reveals the existence of a pilot shortage.  An existing shortage combined with the decreased number of pilots graduating each year from UPT points to a continued pilot shortage within the Air Force.

The good news is that those pilots or aviation enthusiasts in the beginning stages of the hiring process will likely benefit from the pilot shortage.  Although the outlook is bleak, the future holds a lot of potential.  The number of pilots currently coming out of UPT is drastically lower than the number required to sustain the current force.  This means that the Air Force will likely become desperate for pilots soon, creating a wealth of opportunities for candidates.  The Air Force is behind the power curve, but by embracing new innovation and implementing changes to the UPT syllabus, the pipeline will flow once again.

There are two routes available for future Air Force Guard/Reserve pilots to arrive at UPT, either Sponsored or Unsponsored.  A Sponsored pilot is someone who has been selected and hired by a specific unit to attend Officer Training School (OTS) and UPT, versus an Unsponsored pilot who is hired by Air Force Reserve Command (AFRC) and sent to OTS and UPT without a home unit.

The Sponsored program provides flexibility for individual units to control their own squadron manning, by interviewing and selecting candidates through their own pilot hiring process.  As a Sponsored candidate, you are considered an attached member of the unit, and the unit is responsible for you throughout the entire training pipeline.  The benefit of being Sponsored is that you have already been hired and know the aircraft you will fly and the location you will live in after the completion of your training.

Alternatively, an Unsponsored candidate is responsible for finding a unit to hire them prior to the completion of the T-6 phase, or they will be assigned an aircraft and location based on the needs of the Air Force.  The Unsponsored program was implemented so the Air Force could get more pilot candidates into the pipeline faster.  However, in June of 2020 the Air Force elected to suspend the Unsponsored program, although it seems likely that the program could return post-pandemic in order to bulk up the training pipeline and address the pending pilot shortage.

The UPT pipeline has slowed to a crawl as the Air Education and Training Command (AETC) is unable to produce enough pilots to sustain the current force or allow any measure of growth.  An August 2020 article (Tirpak, 2020) says, “Air Education and Training Command had expected to produce between 1,350 and 1,400 pilots in fiscal year 2020, but the actual number is likely to be around 1,200 according to command officials.”  The same training pipeline shortage will continue to be a problem for the reserve component of the Air Force.

In addition to the decreased production of rated pilots, the reserve component discontinued the unsponsored program, creating another source of pilot drought.  As a result, there are currently about 60 pilot candidates who were part of the unsponsored program and are now awaiting pilot training dates. Current guidance from AFRC requires that every candidate from the pool of 60 be hired to a unit before normal hiring at the individual unit level will resume.  For that reason, the hiring at the squadron level will continue to be slow until these candidates have been assigned UPT slots and hired by a unit.  This is expected to take as long as 8 or 9 months, or into the fall of 2021.

To further demonstrate the existence of a pilot shortage within the Air Force Reserve, I have included the actual and expected number of pilot slots available this year, and compare it to the number of pilot slots required to maintain current manning levels.  The Air Force Reserve has been allotted 96 UPT slots for FY21, however, that number is expected to decrease as a direct result of the UPT pipeline slowdown.  The current estimate has the Reserves obtaining only 78 slots with the expectation that 73 candidates actually graduate. The Air Force Reserve requires about 200 UPT pilot graduates for FY21 in order to sustain its current force, so obviously the numbers are heading in the wrong direction.

Even though more pilots are remaining in the Air Force and filling full-time positions, this does not mean the manning issue has been fixed.  The shortage of graduates coming out of UPT has not caught up to current events and the writing on the wall continues to point to a pilot shortage.

In an effort to stem the pending pilot shortage, the Air Force is experimenting and, in some cases implementing, cutting-edge innovations to the UPT syllabus.  The use of virtual reality simulation and more advanced cockpit trainers, combined with an accelerated syllabus are just a few of the tools being used to produce better pilots at a faster pace.

This program is called UPT 2.5 and uses Virtual Reality simulators, student-centered learning, and a self-paced syllabus to produce better pilots faster, and at a reduced cost.  The idea is to use Virtual Reality and Artificial Intelligence to accelerate student pilot learning, and replace actual aircraft training with simulator flights to produce pilot training graduates in a timelier and more efficient manner.  Currently, UPT 2.5 is only available at Randolph AFB and Vance AFB, but the Air Force is looking to scale the program to more UPT bases in the coming years.

Another idea is to hire pilots who already have experience in aviation and build off their existing skills to train more Air Force pilots.  This program is called the Civil Path to Wings and allows candidates with prior commercial aviation experience to enter UPT at one of three points based on the outcome of your Competency Validation.  These candidates would either attend UPT 2.5, skip the T-6 syllabus and be inserted into the T-1 track, or attend a fundamentals course prior to their assigned Formal Training Unit (FTU).

In any case, these candidates are only eligible to fly crew aircraft (i.e. not fighters) within the Mobility Air Forces (MAF), Special Operations Forces (SOF) or Command, Control, and Intelligence, Surveillance and Reconnaissance (C2ISR) aircraft throughout the Air Force inventory.  This would be another way to help expedite the pipeline, produce more pilots per year, and decrease training costs while producing a qualified Air Force pilot.  What remains to be seen is the effectiveness of these modified programs, after reducing the UPT syllabus, limiting the flying time in an actual aircraft, and limiting airmanship opportunities obtained through increased flight time and real flight experience. 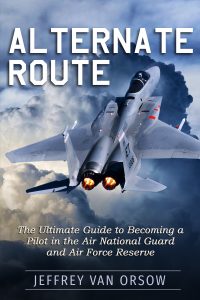 While the current outlook doesn’t lend itself to optimism in the short term, if you have ever thought about joining the military and becoming a pilot, current events may have created an ideal opportunity, and now is a great time to start your research.  As the vaccine continues to roll out all over the country, the aviation landscape is set to change once again, and I believe the Air Force will finally see the true effect of the COVID-19 Pandemic on the pilot training pipeline.  Take advantage of this opportunity and begin taking steps towards preparing to apply to OTS, ROTC, or the Guard and Reserve.

If you are interested in learning more about the pilot training pipeline or how to get a pilot slot in the Air National Guard or Air Force Reserve, please visit my website at youralternateroute.com. I also wrote a book called “Alternate Route: The Ultimate Guide to Becoming a Pilot in the Air National Guard and Air Force Reserve,” and it is currently available on Amazon.  I invite you to check it out if you are at all interested in learning the step-by-step process, and what it takes to become a military pilot.

Jeff is currently in the Air Force Reserve serving out of Travis AFB, CA flying the C-17 Globemaster, and also a First Officer at Alaska Airlines.  He wrote this book to help other people learn about the amazing opportunities to serve in the military by joining the Air National Guard or Air Force Reserve.