If a Navigator is your highly-specialized grandfather/forebear, then the Combat Systems Officer is the jack-of-all-trades millennial. As we’ve seen, the designation of CSO was developed as a catch-all for the various roles in question. Eventually, the aircraft and the missions evolved and the USAF needed somebody who is not quite a NAV, not really a WSO and not exactly an EWO, but who specializes in operating airborne-mission equipment and systems. The umbrella term CSO then got applied to these aviators (it’s a little like how all squares are rectangles, but not all rectangles are squares). 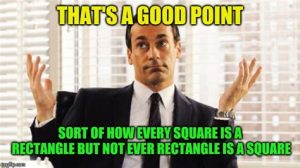 CSOs, in this sense, typically operate a versatile suite of aircraft mission-systems such as radios, sensors, situational awareness (SA) tools like maps and imagery, data links and weapons systems (eg. laser designators for guiding munitions or targeting sensors for aiming gunship rounds). These airmen are expected to maintain high SA on ground-forces movement, enemy locations and positions, and friendly air assets. Given their mission set, CSOs and are generally found within the AFSOC (Air Force Special Operations Command) communities.

What's a CSO?
Clear Clear All